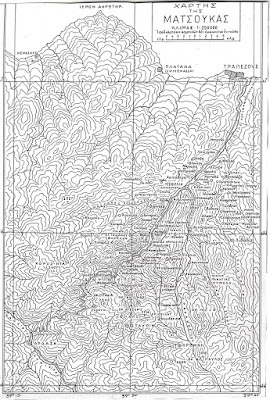 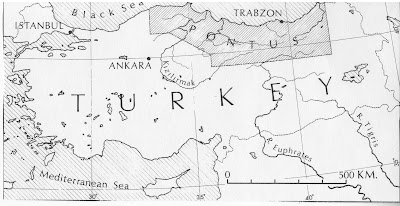 Crypto-Christians of the Trabzon Region of Pontos

The crypto-Christians (also called cryphi, klosti, Stavriotes, Kromledes) were Christian Greeks who due to the Muslim persecution against Christians publicly declared themselves Muslims. However, in secret, they upheld their Greek language, customs and Christian religious practices.1

Crypto-Christians were not polygamists and they were married in a Christian as well as a Muslim ceremony. The Christian marriage ceremony was often conducted in a rock-hewn house or one underground. When one of them died, a Christian funeral took place as well as the usual Muslim one. Up to the mid 19th century their Christian ceremonies were conducted with great care, but by the early 1900s as long as the men registered themselves as Muslims (thus available for military service), nobody asked whether they were Christian or Muslim at heart.2

Greek authors gave some curious details of the secret Christian rites of Greeks in the Trabzon district (see Map 1). Crypto-Christians followed the Orthodox fasts. Their children were baptised, and bore both a Christian and Muslim name for secret and public use respectively. They never allowed their daughters to marry Muslims, but the men did take Muslim wives. In the latter case, the Christian marriage was conducted in secret, in one of the monasteries. If pressure was required, the bridegroom threatened to leave his bride.3

The first reference to crypto-Christians in the Trabzon region comes from an American missionary in 1833, followed by W.J. Hamilton in 1836 and two French travellers in 1840. (Between 1796 and 1832, none of the 25 western travellers, who left a record and passed through this region, mentioned crypto-Christians.)4

During the century after 1461, Trabzon became a ‘Muslim’ town; partly by influx of Muslims, partly by deportation of Christians, but largely through conversion. (There were considerable financial benefits in converting to Islam.) According to Ottoman tax registers [tahrir defters] in 1520 (59 years after the fall of Trabzon to the Ottoman Turks), Trabzon was still 86% Christian. However, by 1583, it was 54% Muslim, with still 77% Greek speaking.5

Greek historians maintain that, like Of (a village 45 km east of Trabzon) and the Greek-speaking Muslim Oflus, the Greeks of Tonya (42 km south-west of Trabzon) converted to Islam in the late 17th century. However, in the case of Tonya there is no popular explanation of why this happened. The notion is plausible, for in the late 17th century, Christian Greeks in the Pontos experienced considerable pressure on their faith. In the case of Of, we now know there was no mass conversion and the Muslims may simply have overtaken the Christians by natural increase.6

Even after conversion to Islam, some people around Trabzon, as reported in the 1890s, did not forget their Christian roots. There were whole villages on this seaboard whose inhabitants were Muslim, and would resent being called anything else; yet their Greek origin was believed both by history and by some of their traditions. For example, Surmene and Of, two considerable villages (35 km and 45 km east of Trabzon respectively), hold to certain customs, which connect them with the Christian faith. Under the stress of illness, the image of Madonna is suspended above the sickbed; the sufferer sips the forbidden wine from the old cup of the Communion, which still remains a treasured object, much as they might be puzzled to tell you why.7

Impact of the Tanzimat reforms and Hatt-i Humayun

The Tanzimat was a period of legislation and reform that modernised Ottoman state and society, and brought greater state participation in Ottoman society during 1839-76.9 In 1843, a new penal code was introduced, which recognised equality of Muslims and non-Muslims. One year later, the death penalty for renouncing Islam, a provision of the şeriat, [Muslim religious law] was abolished.10 This abolition was a crucial event.

On 18 February 1856, a new reform charter, the Imperial Rescript (Hatt-i Humayun), was promulgated by the Sultan. This Rescript; prepared under strong pressure from foreign powers, laid down the equality of all Ottoman subjects irrespective of religion.11 The Hatt-i Humayun allowed people to report their true religion in public without punishment. Not all crypto-Christians professed their faith after 1856. The revelation continued up to 1910.12

On 14 May 1856, Petros Sideropoulos, the first Kromniot [from the Kromni area, south of Trabzon] crypto-Christian declared his Orthodoxy in Trabzon. On 15 July 1857, the Kromni (KPOMNH at 39036′E 40034′N in Map 2) crypto-Christians presented a petition to the pasha and western consuls in Trabzon (appealing for protection) on behalf of 55,755 inhabitants of 58 settlements, of whom 52% were claimed to be open Christians, 31% [17,260] Kromniot (crypto-Christians) and 17% Muslims.4 Some crypto-Christians who declared for Orthodoxy after 1856 may have had Muslim ancestors and many were registered for military service.13

In relation to the military reforms under the Tanzimat, from 1845, conscription was officially introduced in most areas of the Ottoman Empire. Christians were now allowed to serve within the army, but as this was expected to create tensions, they were soon able to pay a special tax instead (in lieu of military service), which they largely preferred. Muslims, too, could evade conscription by payment, but this was very steep for most.14

After the Hatt-i-Humayun, in towns, districts and villages where the whole population was of the same religion, they could repair, according to their original plan, buildings of religious worship, schools, hospitals, and cemeteries. The plans of these buildings, in the case of new construction, would after approval by the Patriarchs or heads of communities, be able to be submitted to the Ottoman Government, which would decide if they could be constructed. Each sect, in localities where there were no other religious denominations was free to practice its religion in public. In towns, districts and villages where different sects were present, each community, inhabiting a distinct quarter, had equal right to repair and improve its churches, hospitals, schools, and cemeteries. Each sect was free to exercise its religion.15

Impact of the economic conditions of Gumushane on the
crypto-Christians

Gumushane, about 65 km south of Trabzon, was established in the 1590s. Its Greek name of Argyropolis appears to have been derived around 1846. The silver mining economy of old Gumushane declined in 1829 (the silver mines were abandoned in the 1850s) and the emergence of the crypto-Christians of Kromni, Stavri (at 39030’E 40036’N in Map 2) and Santa (40 km SSE of Trabzon) after 1856 are related. In the case of Chaldia (covering Kromni, Stavri and villages further south) at least, the phenomenon of crypto-Christianity arose largely from the peculiar economic and administrative context of the period 1829-56.18

Pontic crypto-Christians only entered their ‘twilight’ world after 1829 and were reluctant to re-emerge in the ‘sunlight’ after 1856. This was to do with the silver-mining and smelting economy of Gumushane. From 1654-1841 both the mining concessionaries (archimetallourgoi) and a new metropolis of Chaldia were in Greek hands, principally the dynasty of Phytianos – which was to provide miners and bishops all over Anatolia and the Caucasus, and a patriarch of Antioch.4

The mines were the property of the Sultan and under state supervision with all precious metals supposed to be sent to Constantinople. (Without doubt, much precious metal was concealed or smuggled.) However, the mines around Gumushane were effectively controlled by the archimetallourgoi, who was invariably a Greek, with the skilled labour also monopolised by Greeks. This situation, by one probably unreliable tradition goes back to the patronage of Maria of Libera (Gülbahar), Pontic Greek wife of Sultan Bayazid II (1481-1512), gave the Greeks of the area a peculiar economic position and considerable tax privileges.19

From at least the mid-seventeenth century, the Greeks of Gumushane and the surrounding villages were exempt from normal taxes in return for working in the main branches of the industry; namely mining, smelting, and charcoal burning. Gumushane drew its charcoal from an area later to be identified with crypto-Christianity. These villages were excused the haraç, tribute which Christians paid in lieu of military service, thus losing a basic legal distinction as Christians. The crypto-Christians claimed their faith in 1856 only after the mines of Gumushane were abandoned. As they had never paid the haraç before they still demanded exemption, but mining service had ended and they were given the ‘privilege’ of military service instead. The argument dragged on into the 1860s.19

After 1829, it was a question whether the silver mines of Chaldia or the charcoal for smelting from Imera (Stavri /Kromni), were exhausted first. The most intensive crypto-Christian (and fewest Muslim living) areas in the petition presented in 1857 (by Kromniot crypto-Christians mentioned previously) had been economically dependent on silver-mining and charcoal burning for smelting. Smaller crypto-Christian elements were listed near alum mines to which the archimetallourgoi of Gumushane turned after 1829, when their own silver mines declined. Neither Professor Dawkins nor Hasluck (see ref 3) asked why crypto-Christians were keeping their identity secret in places where there were so few declared Muslims.4

The Orthodox church was more reluctant that the Ottoman state to recognise the situation after 1856. By 1863, the church’s solution was to combine the monastic exarchates of Sumela (ΣOYMEΛA 39039′E 40041′N in Map 2), Vazelon (BAZEΛΟN 39030′E 40045′N in Map 2) and Peristereota (ΠEPІΣΤEΡEOTA 39043′E 40047′N in Map 2) into its last Anatolian eparchy, Rhodopolis. According to the petition of 1857, the 14,525 inhabitants of the new diocese were 53% open Christian, 37% crypto-Christian and 10% Muslim. Here if their landlord was one of the three ruling abbots, from whom were the crypto-Christians keeping their identity secret?4

Palgrave (1826-88), the British consul in Trabzon, was first to observe that Ottoman mining and smelting service in the Pontos was in lieu of military service, so Kromniots carried arms (another obvious advantage) as Muslims but did not pay poll tax as Christians. With the decline of the mines after 1829, they clung to the best of both worlds.4

4 Bryer, A 2006, R.M. Dawkins, F.W. Hasluck and the ‘Crypto-Christians’ of Trebizond, Paper delivered to British School at Athens.

17 Fotiadis, K 2001, A translation of, The forced Islamization in Asia Minor and the cryptochristians of the Pontos (in Greek), Kiriakidis Bros, Thessaloniki, Greece, pp. 369-70.

I warmly thank Anthony Bryer OBE, Emeritus Professor of Byzantine Studies, University of Birmingham, for sending me a copy of his 2006 paper delivered to the British School at Athens, which I have quoted here. I also thank him for his cryptic reference to me in his paper. Bryer’s work is essential reading to those studying the history of the Pontos.